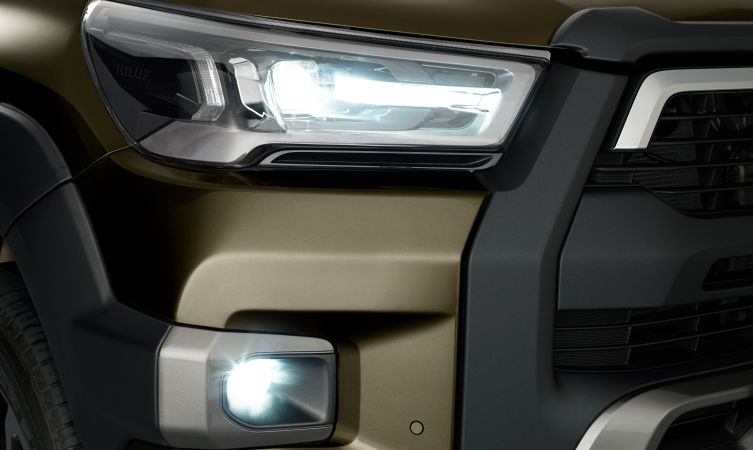 Since its launch in 1968, the famously unstoppable Toyota Hilux has proved its toughness time and again, from conquering volcanoes and both poles to winning the gruelling Dakar Rally.

Now the revised eighth-generation model presents a stronger proposition than ever thanks to a striking new design for the 2021 model year, a powerful 2.8-litre powertrain, and equipment upgrades that will increase its appeal for business and leisure users.

The frontal design has been completely reworked to incorporate a powerful, three-dimensional treatment across the grille and bumper. It is a change that increases the vehicle’s road presence and reinforces its robust, go-anywhere credentials.

Depending on model grade, new front and rear LED light units are available, plus 18-inch black alloy wheels with a contrasting machined silver face. A striking new Titan Bronze metallic body colour (seen in these images) has also been added to the Hilux palette.

The existing 2.4-litre powertrain has now been joined by a more powerful 2.8-litre turbo diesel engine, which will ensure the pick-up stays on the performance pace within its segment. This powertrain will be available with a choice of either six-speed manual or automatic transmission, and all UK versions will have all-wheel drive

Engineers focused on improving the model’s on-road prowess, without sacrificing any of its legendary off-road capabilities.

Regarding the former, comfort and driveability have been enhanced through improvements to the suspension and power steering. The front and rear shock absorbers have been retuned, and there is an improved leaf spring design with new bushing. These contribute to a smoother ride with less shock when driving over joints and holes in the road surface.

The Invincible X also comes with its own combination meter design, black metallic and dark chrome trim accents within the interior, and even a model-specific key. Blue illumination is integrated into the door trims and the perforated leather seat upholstery features a two-tone treatment.