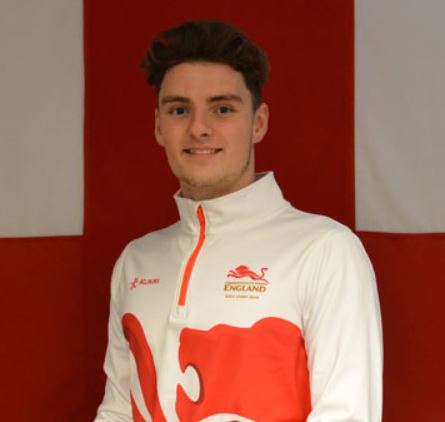 Having picked up a bug in October which saw him have to withdraw from the Manchester
International Meet, Elliot was referred to his GP by the Swim England Performance Doctor
for a full blood test to see if there was anything underlying as to why he seemed to pick bugs
up so easily. Pleased to say that these results came back all fine and he seems to just be
unlucky
Elliot managed to get over the bug quickly and got himself back into full training in the run
up to the Short course North East Regional Championships. Elliot swam in the 100 back, 200
back, 100 free and 200 free and claimed 3 golds and 1 silver over the two days
DECEMBER

At the beginning of December was the Swim England Winter National Championships held
in Sheffield. Elliot swam in the 100 backstroke, 200 freestyle and 100 freestyle. Unlike a lot
of swimmers at this meet, Elliot was not rested and was still in hard training. Elliot won
bronze in the 100 freestyle, was 4th in the 100 back and 8th in the 200 free. Elliot and the rest
of City of Sheffield’s focus was the meet the following week, the Swim Cup Amsterdam (a
long course event)
Elliot swam well at this meet, having been given a couple of days rest for this meet which
saw him win the 200 back (picture above) in a new personal best time, a time which makes
him the 7th fastest ever in Great Britain.

This obviously gave Elliot a much needed boost having had such a frustrating 2019. Elliot
returned home happy with his swims and was able to really enjoy his 20th birthday and
Christmas (with the 25th – 27th Dec off training☺)

JANUARY
Elliot has managed to stay healthy and training has gone well for the start of the new year
which we hope will continue. On 16th January, Elliot and 3 other members of City of
Sheffield travelled to Antwerp, Belgium for The Flanders Cup. Elliot swam in 2 events over
the two days, the 100 back and 200 back. Elliot was in full training and unrested for this
competition. Elliot came 4th in the 100 backstroke posting the fastest time he has ever swam
whilst in hard training and we are pleased to say he again won the 200 backstroke in a time of
1.58.92 which again is the fastest he has ever swam whilst in hard training. Although it is
early into the new year, he has posted the fastest time by a British swimmer this year to date
in this event on his Flanders Cup swim which again is a further confidence boost. He returned
home in the early hours of Tuesday 21st and went straight back to training the same day with
Sheffield until he left for Luxembourg on Thursday 23rd with the Swim England Performance
Squad

In Luxembourg Elliot swam the 100 back, 200 back and 200 free. Elliot made the A Final in
the 100 and 200 back, finishing 7th in the 100 back and 5th in the 200 backstroke. This meet
makes interesting viewing as the roof at the pool causes issues for many of the backstrokers
(Elliot would be able to explain more) but it tends to cause them to zig-zag in the lane and
swim more like 110m in a 100m race!. Elliot is one that struggles here, but his times with this
issue and although not as quick as the week previously, times were still good for this time of
the year that he was just over a couple seconds slower than his Flanders time in the 200
backstroke.

February will see Elliot competing in the Yorkshire Championships in Leeds on 8/9th
February. March Elliot has entered the Edinburgh International Meet 13th
– 15th and will be swimming the 50, 100, 200 backstroke for this meet.